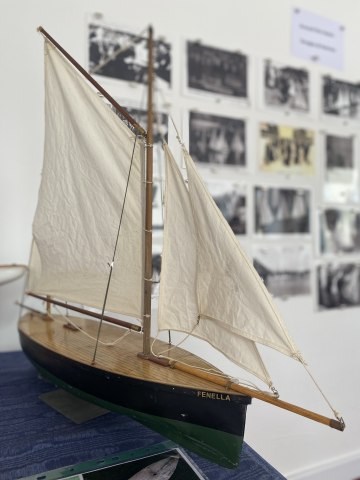 The latest exhibition at Rushen Heritage Centre takes visitors back to a time when model boats were all the rage in Port St Mary.

‘Model Yachting Mania’ tells the story of Port St Mary boating pool, which was built in 1937 as a response to the increasing popularity of model boats and boating sites around the Island.

The exhibition has been compiled in conjunction with model boat enthusiast Brian King and will run until Saturday, September 3rd. Rushen Heritage Centre – at 1, Bridson Street, Port Erin – is open 10am-4pm from Tuesday to Saturday, with free entry for all.

Brian, who grew up in Port St Mary, said: ‘People have been making model boats for hundreds of years but it really took off as a national sport in the UK at the beginning of the 19th century. Lakes were made into boating pools and purpose-built pools, complete with clubhouses, spread up and down the country.

‘In the Isle of Man, Ramsey was the first to develop a club on the lake at the Mooragh, followed by Douglas on the Tromode dam. Not to be outdone, the Port St Mary model boat enthusiasts, of whom there were many, decided to build their own purpose-built pool at Kallow Point.

‘Model yachting ”mania” spread through Rushen like wildfire. While there had been one or two traditional scale model boat builders, like John Gawne from Fistard, it was the competition element that seized the day. This needed a decent-sized, regular-shaped pool, and from this the people of Rushen raised the money, volunteered their services and even equipment to have a pool of a size to enable proper competition for the two national-sized boats, the 36R and the 50-inch Marblehead.’

The pool was completed in 1937, with competitions taking place between the Island’s clubs, before being interrupted by the war. It remained popular in the post-war years, but eventually interest started to wane and the pool was closed around 1997 and filled in around three years later.

Doreen Moule, Chair of Rushen Heritage Trust, said: ‘I think most children from the era covered by the exhibition will have fond memories of visiting a boating pool near where they lived. They were incredibly popular in their heyday, with regular competitions, and we hope the story told by our latest exhibition will resonate with many people, from Rushen and further afield.’

Rushen Heritage Centre is always on the lookout for new volunteers – if you would like to find out how you can help, please email Rushen Heritage Trust coordinator John Quirk at rushenht@gmail.com or call him on 464634.