Andrew Foxon
This event has passed. 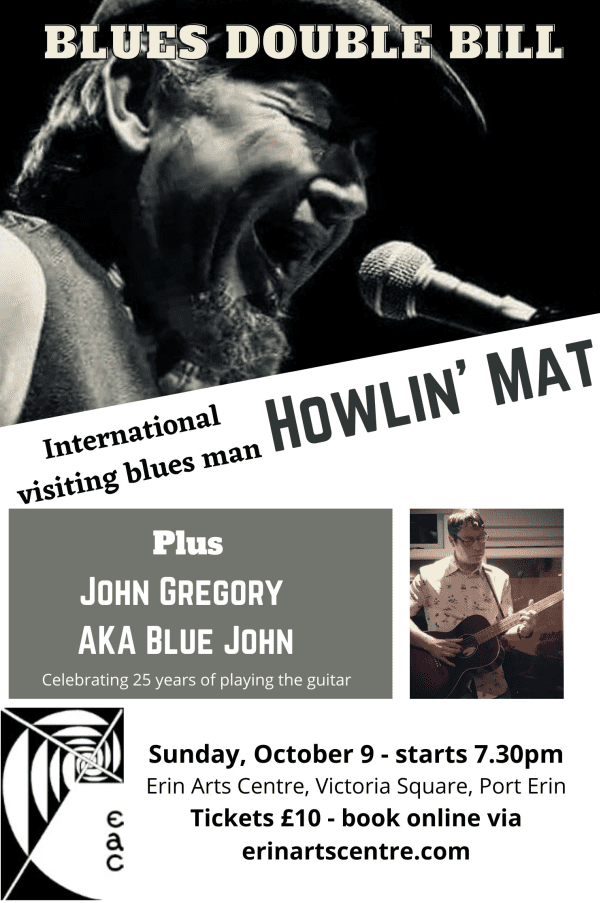 The perfect antidote to those post jazz festival blues, John Gregory brings a double whammy to the EAC!
Howlin’ Mat is one of the hardest working solo acts around both in the UK and Europe – and he’s even played in the Arctic Circle four times! Mat is a nationally acclaimed slide guitarist and cites Elmore James and Mississippi Fred McDowell amongst his major influences. No Howlin’ Mat show would be complete without his trademark cigar box guitar for which he has had compliments from the likes of John Paul Jones [Led Zeppelin] and Mud Morganfield [son of Muddy Waters]. He’s also a skilled storyteller, intertwining tales of life on the road with his music to create an intimate and unique experience for each audience. This is no fancy fair with the rough edges all polished and made squeaky clean but the real raw roots blues deal!

Meanwhile, John Gregory is celebrating 25 years of playing the guitar and 10 years of teaching it. The past few years have been particularly eventful – he has toured the British Isles with top US blues musicians Ari Eisinger, the Erin Harpe Country Blues Duo and Toby Walker, performed many gigs with Mississippi John Hurt biographer Dr Phil, played his musical hero Big Bill Broonzy’s guitar in Chicago, performed at the world-famous Bitter End club in New York, appeared at venues in Texas, and opened for many world-renowned blues, jazz and roots musicians such as Martin Taylor, Duck Baker, The Fabulous Thunderbirds, Nine Below Zero, Joe Filisko and Eric Noden, Michael Messer, John Miller and Grant Dermody and more.